Most colleges and independent schools are very familiar with the Millennial mindset. After all, they’ve been coming in through your front door for almost 20 years. But the last wave of Millennial students have moved on, and your new Gen Z audience is significantly different.

What exactly is Gen Z? Anybody born in 1995 or later, and they’re the largest demographic group in the country. At 25.9% of the total population, Gen Z has 4.55 million more members than the second largest group, Millennials. If you think you’ve developed effective strategies to deal with Millennial-style attitudes and values, it’s time to rethink for Gen Z. Here are a number of traits that make Gen Z even more of a challenge to communicate with than Millennials. And even more rewarding when you get it right: 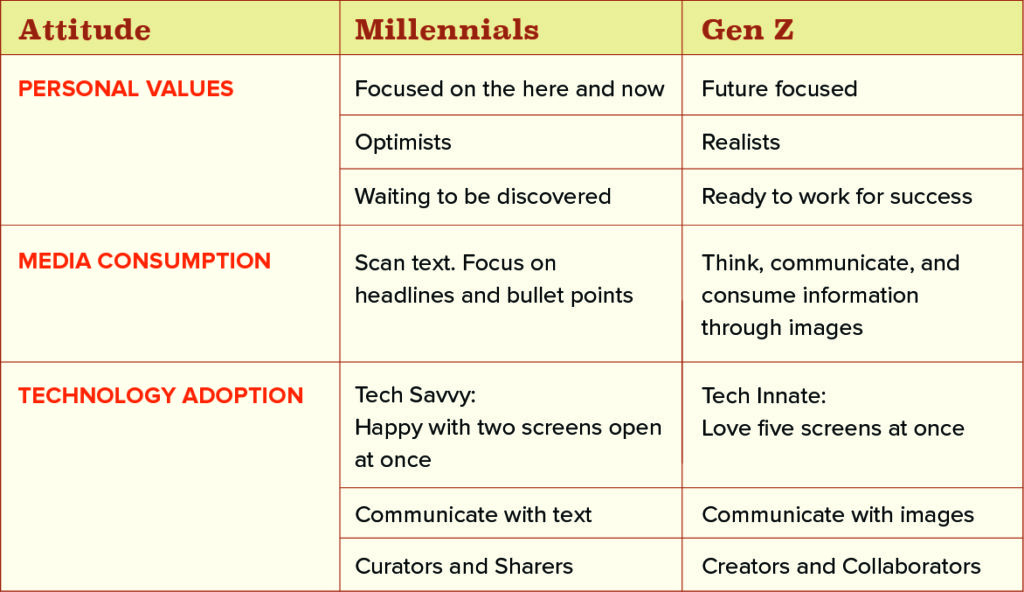 THE BAD NEWS – THEY HAVE AN 8-SECOND ATTENTION SPAN

The volume, variety, and velocity with which Gen Z likes to have information headed at them is likely to have your head spinning. You clearly can’t use the same old media the same old ways. Since they like to communicate with images, anything that takes time to digest – long-form brochures, static websites with massive word counts, and text-heavy emails – won’t attract the quality or quantity of Gen Z students you need. Even videos, if too long, won’t get it done.

There are a lot of different things that a generation could name as its deepest fear, and for Gen Z, it’s FOBO: Fear Of Being Offline. No joke: if you’ve ever experienced that momentary panic of leaving home without your cellphone, you know it’s real. Multiply that by a factor of X, and you can see the importance of real-time communication and response with this generation. Once you understand that deeply, you won’t see it as a barrier to communication: you’ll understand it’s a green light to keep a steady stream of short, visually driven messages streaming towards them.

We know it’s possible to refocus outreach strategies to make them more effective because we’ve helped other institutions do it. Schoolcraft College, a community college in Livonia, Michigan, is a perfect example.

Their old communications were text-heavy, and based on facts the Gen Z audience cared little about. But we understand that 65% of Gen Z members have a serious aversion to slick, polished imagery, where everything and everyone looks too perfect by half. Also, they have no interest in following the herd. 77% of them want to see real people in real environments.2

As you can see from the examples below, the existing communications for Schoolcraft were way out of line with the hearts and minds of Gen Z students. So the new communications we created were image-based and tapped into Gen Z’s readiness to work hard for their success. And worked to turn common misperceptions about community colleges on their heads. Schoolcraft has consistently outperformed its competitors in unduplicated headcount — in some cases by double digits — over the last five years.

WHAT SHOULD YOU DO NEXT?

This excerpt is just Part 1 of our two-part series. Part 2 will cover Gen Z’s very different values from Millennials. It will also include a series of specific real-world recommendations of how to refocus your communication and improve your performance with this exciting and challenging new audience.